A Short history of Pimlico and Eccleston Square

Pimlico was originally known as the Neat House Gardens and was famous for its wholesome produce of herbs and vegetables. By 1820 the Neat House Gardens had become urban fringe’ and in addition to the market gardening there were taverns, resorts and industry. The Grosvenor Estate owned most of the lands and were in no rush to develop: The produce brought in a good income and the fact that it was a flood plain meant it would be costly to build on. Eventually a man called John Johnson bought a lease to develop the land. Some houses were built but he encountered a great deal of opposition from the gardeners and in 1825 he sold out to Thomas Cubitt. Cubitt compensated the gardeners generously and let the land to a Mr Martin who farmed the land until development was feasible. Works eventually began with sewers and raising of the ground above flood level. In 1824 Thomas Cubitt had started to develop Belgravia, and with this endeavour, he made his name and fortune. In 1843 he turned his attentions to South Belgravia, as he preferred to call it and laid out the street and squares of today’s Pimlico. 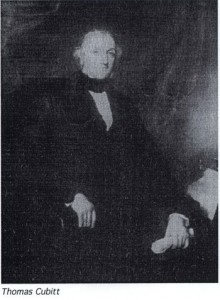 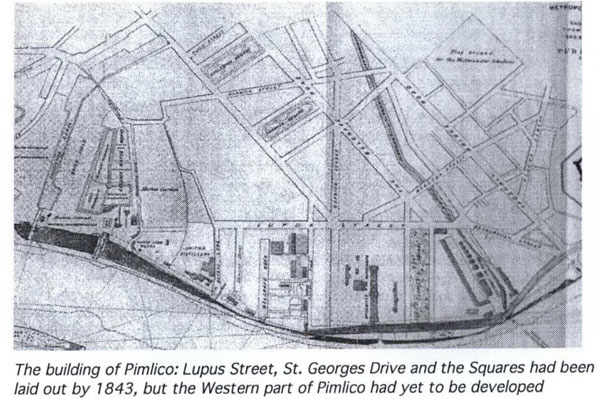 Thomas Cubitt did not build all the house himself. The infrastructure was built by Cubitt’s men. Cubitt dictated the size and number of houses on each street. He sometimes provided elevations and always insisted on uniformity. The Landlords of the time also influenced the Architecture. In particular the Second Marques of Westminster, who was greatly in favour of the use of Stucco and balconies over Doric porticos.

The Squares and streets were thus designed as Italianate stucco terraces, many of which have a ‘Pimlico porch’ (Doric portico with balcony over). The street are broad and the squares provide contrasting greenery to the elegant and formal frontages. The area of Eccleston Square, Warick square and St Georges Square remains one of the most architecturally consistent areas of London. 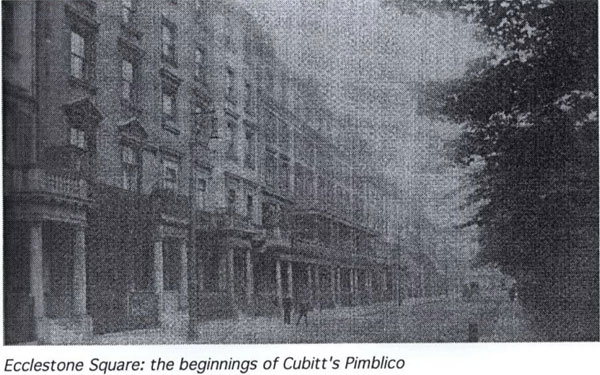 Thomas Cubitt died in 1855 by which time the broad street were fully laid out and about half the houses built. The rest were not finished until 1875 but were true to Cubitt’s plan.

The elegant houses of Pimlico were intended for the wealthy middle classes; the aspirations of its residents however, were short lived. Before the houses had been completed the drinking water from the Thames was becoming increasingly polluted and in 1854 there was a cholera outbreak, which is said to have resulted in deaths on every street in Pimlico. In 1858 the ‘stink’ was so bad that it was affecting the House of Commons, a bill was quickly passed and in 1875 Joseph Bazalgette resolved the problem by building new sewers and the Western Pumping Station.

In 1860 Victoria Station was competed and Streatham and Brixton became commutable from London. Central London was no longer fashionable and gradually the larger houses of Pimlico became hotels and lodging houses.

Cubitt himself was said to have regretted building houses that were too large and too expensive for the locality. By 1861 there was much concern amongst the middle classes at the rapid increase in low-income residents. By 1894 many houses were occupied by 4 or 5 families, they were poorly maintained and very shabby. After the First World Was the shortage of homes was a prominent issue and the London Housing board began to convert some houses into flats and to demolish older properties in order to build new estates. In 1935 it was calculated that of the 3000 houses in the area only 846 were in single family occupation. World was two brought devastation to the area with few street avoiding bomb damages. All the railings were melted down for the war effort and the squares were used as allotments for growing vegetables.

After the war the city council produced a ‘plan for Pimlico’ that propsed to get rid of the dereliction and start again with ten storey apartment blocks shopping zones and broad roads. Thankfully a more modest building programme was actually implemented. The Churchill Garden Estate was built and was very successful. Cubitt’s Pimlico was said to look drab and shabby in contrast. However by 1961 the run-down charm of Pimlico started to attract the more discerning residents who were attracted to its wide street and green squares. Although shabby it was found to be pleasant, socially mixed and un-spoilt and so the gentrification of Pimlico began.

The earliest houses, numbers 1-3 were built by Thomas Cubitt in 1836. They were designed in a restrained Last Classical style, similar to much of Belgravia. Numbers 4-5 also by Cubitt were built in 1842 and are taller and more omate. In 1841 numbers 6-10 were built and these are still more omate and with a ‘Pimlico porch’ from this date onwards all the houses have porches. In 1847 numbers 11-16 were built and the height went up from 4 to 5 stories. Numbers 17-24 were built in 1857-59 and Thomas Cubitt built the last two houses on the NE side of the square in 1855.

The SE side of the square is far more uniform and was built between 1842 and 1855 they are almost all by Thomas Cubitt. Along St. Georges Drive the properties have slightly increased frontages. The Belgravia road side is more varied and has changed far more over the years. Numbers 79 to 83 were built in 1854-6. 82-83 is the Eccleston Hotel which has a neo-georgan extension behind built in 1929-30. Numbers 84-89 were built in 1984-9, in ‘Neo-Cubitt’ style by Diamond Partnership, but have six stories instead of five. 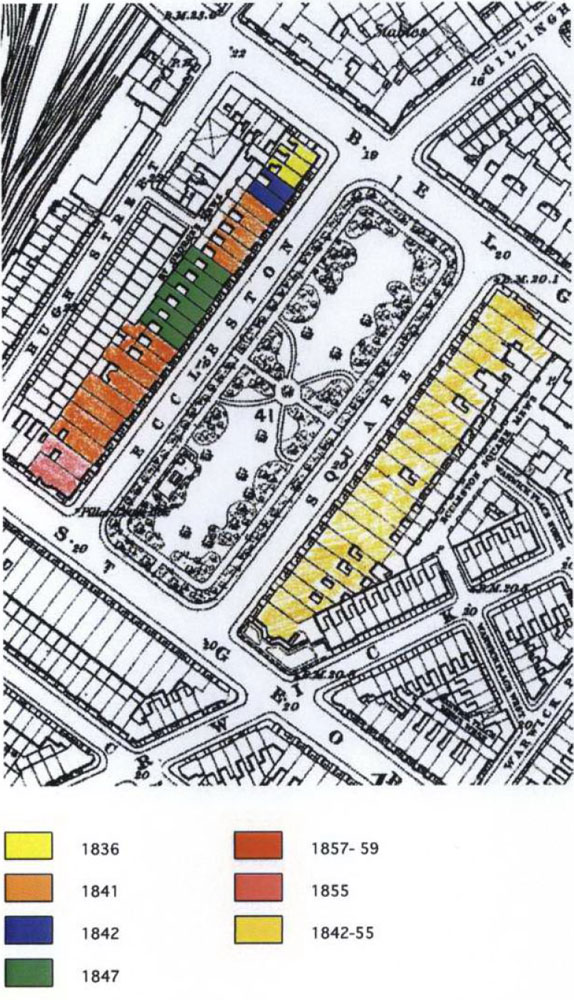 Today, Ecclestone Square is visually consistent and largely unchanged since the 1850s when it was completed. Properties today are occupied by a variety of residents and businesses. These include several charities, religious mission societies, educational establishments, hotel, a Buddhist centre and a Church of England seafarers.